(June 8, 2020) The COVID-19 pandemic is a “sharp reminder” of how we are all intimately connected to each other and to nature, the UN chief said on Monday, World Oceans Day.

“As we work to end the pandemic and build back better, we have a once-in-a-generation opportunity – and responsibility – to correct our relationship with the natural world, including the world’s seas and oceans”, Secretary-General António Guterres upheld in his message for the day.

We not only rely on the oceans for food, livelihoods, transport and trade but, as the lungs of our planet and its largest carbon sink, they also play a vital role in regulating the global climate.

“Today, sea levels are rising due to climate change, threatening lives and livelihoods in low-lying nations and coastal cities and communities around the world”, Mr. Guterres reminded.

Moreover, as the oceans are becoming increasingly acidic, marine biodiversity and essential food chains are increasingly being jeopardized. And plastic pollution has become ubiquitous.

Against this backdrop, ‘Innovation for a Sustainable Ocean’, has been chosen as this year’s theme.

Better understanding of the oceans is essential for conserving fish stocks and discovering new products and medicines.

“The upcoming United Nations Decade of Ocean Science for Sustainable Development will provide impetus and a common framework for action”, the UN chief said, urging governments and all concerned to commit innovation and science to conserve and sustain the world’s oceans.

In that same vein, Tijjani Muhammad-Bande, President of the UN General Assembly, underscored in his statement that the unsustainable misuse of this valuable resource threatens “the ability of our oceans to provide for us”.

As we look towards the Decade, which will begin next year, he encouraged everyone to “take urgent action” by putting protection measures into motion to enable the oceans to create a better world on land and under water, “for generations to come”.

A healthy marine environment holds untold potential for achieving the entirety of the Sustainable Development Agenda.

In January, the Decade of Action and Delivery opened to implement the Sustainable Development Goals (SDGs): “Protection of marine biodiversity is of essential importance as we progress with the implementation of SDG14”, Mr. Mohammad-Bande said, referring to the 14th global goal, to conserve and sustainably use the oceans, seas and marine resources for sustainable development.

He also pointed out that four SDG targets pertaining to the goal, expire in 2020.

“This World Oceans Day, we must take a moment to reflect on and appreciate all that the ocean does for us. It is also an opportunity for us to look forward”, he pointed out, exhorting everyone to “harness the potential of blue and green economies”.

Strategic investments can generate 100 million jobs by 2050, facilitating critical global recovery efforts in the wake of the coronavirus pandemic, according to the Assembly president.

“This year we must take action to prevent a further eight million tons of plastic waste from entering the ocean and protect global ecosystems”, he stressed.

“We simply cannot stand by while oceans acidify, sea levels rise and pollution increases”, he concluded. 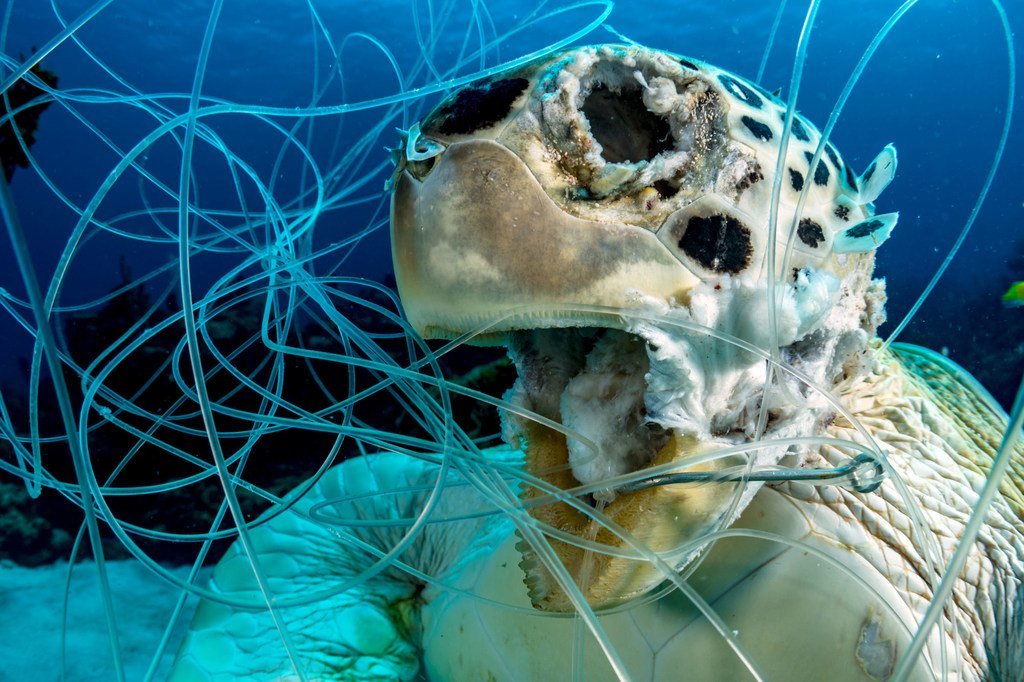 UN World Oceans Day/Shane GrossDiscarded fishing lines and hooks are also deadly; this decomposing green turtle was ensnared in the Bahamas in the Caribbean Sea.

Our beat is justice and equity in the charity sector. We follow news of the day, highlight people doing amazing work and conduct new research that sheds light on the forces driving the sector. The Charity Report TalkingUP podcast, hosted by editor in chief Gail Picco, interviews authors and journalists wbo have lots to say about the issues facing our time.  This is a place where independent thinking is valued, questions about the charity sector are asked and our independence is fiercely guarded. The guardians of that space are our Subscribers and Patrons who provide the financial support to pay writers, editors, researchers, producers, and content providers. We adore them.